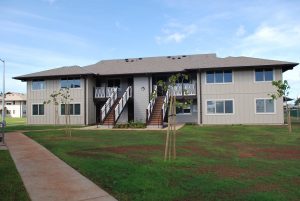 The Villages of Maili is an Ohana Zone funded program in Leeward Oahu that provides a total of 80 units set aside for emergency shelter and temporary bridge housing.  As of November 30, 2021, the program has closed services and is no longer accepting new intakes or referrals. The Department of Hawaiian Home Lands (DHHL) is converting the facility for use as long-term affordable rental housing for eligible beneficiaries on the Hawaiian Home Lands wait list.

The program was located at the site of the former Ulu Ke Kukui transitional housing program, which closed in October 2018.  When the former program closed, the Hawaii Department of Human Services explored ways to continue the short-term use of the property for homeless services instead of having the site sit empty and dormant for a period of potentially one year or more.

Villages of Maili was operated by Catholic Charities Hawaii, and modeled after the Kakaako Family Assessment Center.   Villages of Maili serves homeless individuals and couples, as well as families with minor children.  A unique component of Villages of Maili was the Bridge Housing program, which provides temporary housing for chronically homeless individuals referred through the Coordinated Entry System that have been assigned a permanent supportive housing voucher but require a temporary place to stay while searching for a longer-term rental unit.

Between April 2019 and September 2021, Villages of Maili provided shelter to a total of 955 homeless individuals, including  over half (491 or 51.41%) that were placed into permanent housing.  In addition, between intake and exit, participants at Villages of Maili increased household income by an average of 6%, including a slight increase in the percentage of households receiving earned income (e.g. employment income).  Over the entire project period, the average length of stay for a participant at Villages of Maili was 140 days, or a little less than five months.