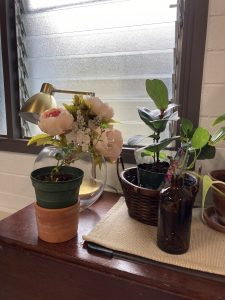 Eighteen months after the first residents moved in to Hale Maluhia, there many milestones to celebrate. The program has served over 25 survivors and 44 children, all of whom have remained stably housed at Hale Maluhia or have transitioned to other permanent housing in the community. The twenty apartment units remains at capacity, and vacancies are rapidly filled from the Domestic Violence Coordinated Entry System. Most importantly, the program has given a renewed sense of hope to the survivors who have called Hale Maluhia “home.”

“You can really see the transformation they go through,” says Lydia Pavon, Hale Maluhia’s Housing Manager. “Especially when you see the children.”

Macy*, one of the first residents to move into the building, recalled how much having a stable place to live has helped her family weather the challenges of the pandemic. All four of her children participated in distance learning during the previous school year – a challenge for a family of five sharing a one-bedroom apartment. There were work stations set up in different corners, headphones, and a lot of bouncing back and forth between virtual classrooms, but Macy continued to remain positive.

“Seeing all the people who are on the streets during the pandemic just made me think of how me and my kids are safe here,” Macy says. Prior to moving into their apartment, Macy and her children shared a congregate emergency shelter space with other survivors, where the risk of exposure would have been higher. “I couldn’t afford to have four kids getting sick.”

Lina*, a resident since last August, hopes to continue living at Hale Maluhia for as long as she can. Having an income-based rent amount helps her to remain stably housed while building up savings from her employment. When her younger child is old enough for school, Lina hopes to resume her own education and continue working toward her goals.

There are no limits to the length of time a survivor may stay at Hale Maluhia or receive services from the Domestic Violence Action Center (DVAC). This policy, DVAC says, is critical to ensuring that survivors do not feel pressured to return to their abuser or to seek other housing before they are ready.

For survivors who are ready to transition to other living arrangements, DVAC and their partners assist at every step of the way. In addition to exploring specific housing resources for survivors of domestic violence, DVAC is working closely with Partners in Care, the Oahu Continuum of Care, to identify households who may be eligible to transition to the new Emergency Housing Voucher (EHV) program. Several households are working on a possible transition to the EHV program, which would offer a permanent tenant-based subsidy like the Section 8 program.

Despite the availability of new resources, survivors still face challenges. Finding landlords who are willing to rent to them is one of the biggest hurdles to overcome.

“For those who have been approved for the EHV program, they’re asking around in the communities they used to live in, just trying to ask if anyone knows someone who has a place for rent,” Pavon says. She added that Hale Maluhia will continue to support them until they successfully complete the transition to the EHV program.

DVAC’s goal is to continue operating the program as long as possible, emphasizing the importance of safe and accessible housing options for survivors.

*Names have been changed to protect the identity of the survivors.